As a frequent user of Ventrilo (and sometimes Mumble or TeamSpeak) I had trouble using push-to-talk applications on Windows tablets due to a lack of physical buttons. Many of these new touch-enabled SKUs are offered without keyboards or mice, and I’m not thrilled about needing to plug one in for access to a single button. This article documents a couple of workarounds I’ve come up with, and shows how you can still talk to your pals on your new-fangled form-factor device.

Those lucky enough to have purchased a system with a physical rotation lock button can use it as a push-to-talk button. This is what I do on my Lenovo Thinkpad Tablet 2. Open up whatever interface you use to bind a keypress (Ventrilo’s settings, for instance) and touch the rotation lock button. If you are able to bind your rotation lock key to be push-to-talk, test it out and you’ll quckly get annoyed by how the original function of the button has been overloaded.

The next step is to disable the key’s ability to rotate the content of your display. I did this by opening Device Manager (run ‘devmgmt.msc’ from the command line) and looking under “Sensors.” Find the correct sensor which controls detecting your device’s orientation (mine was “HID Sensors Collection”) and disable the device node. This will also prevent the rotation lock pop-up from appearing.

Without any physical buttons (keyboard or otherwise), one can fall back on software to mimic keypresses from the hardware. This is the configuration I suggest on a Dell Venue 8 Pro, or Asus T100 in tablet mode. I wrote a tiny Win32 app that works just like a button on your mouse. Touch and hold over the box and the button goes down; release your finger and the button is disengaged. Your system receives the same scancodes as if you’d really been playing with ‘Mouse Button 3’! 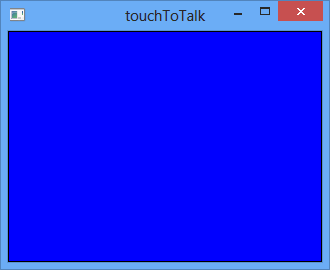 The window turns red to let you know when you’re holding down your Push-To-Talk key.